Something is eating Trees all around town. What’s going on?

Spring has sprung, and people in some neighborhoods in and around Saratoga Springs are noticing dark, hairy caterpillars chewing on the leaves of their trees. What we are seeing locally is part of a large regional outbreak of spongy moth.

Read on for questions and answers about this pest and what you can do about it. 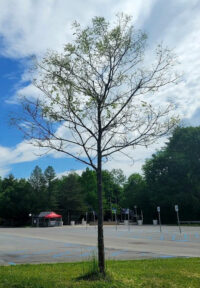 Q: What are spongy moths? Where do they come from?

A: Spongy moth is the new common name of Lymantria dispar dispar, formerly known as gypsy moth, a non-native insect that was introduced to our area from France in 1869. It takes four forms throughout its lifecycle: egg, pupa, larva (caterpillar), and moth. The small young caterpillars produce a strand of silk and can be picked up and carried by the wind into new areas – hence the former “gypsy” analogy. See the University of Wisconsin’s web page for detailed information about the life cycle.

A: No, spongy moth caterpillars don’t make tents; those are eastern tent caterpillars, whose tastes are mostly limited to fruit trees like apples and cherries. The NY State Department of Environmental Conservation provides a helpful comparison chart with photographs.

Q: How long will the spongy moth infestation last?

A: The caterpillars hatched shortly after leaves started appearing on trees. They are hairy with 2 rows of blue and red spots on their backs. They will eat and grow until late June or early July, then enter cocoons. After that, there won’t be any more caterpillars for the rest of the year. In mid-July the moths will emerge, and the females–who can’t fly–will lay eggs and the cycle will start again. 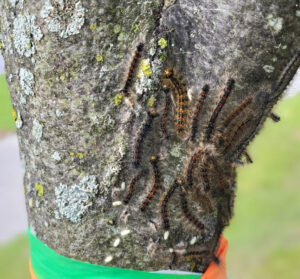 Q: Will they attack our trees again next year and then every year after that?

A: Spongy moth infestations do not last forever but tend to come in multi-year cycles. This regional infestation began last year. In June 2021, the oaks around SPAC and the Gideon Putnam Hotel were totally defoliated. Hillsides were bare up and down the Northway, with the area around Lake George particularly hard hit. In these and other areas, the moths laid many more eggs than the previous year. As expected, 2022 is another high infestation year. Caterpillars have already spread widely across Saratoga Springs and are busy stripping trees of their leaves.

Outbreaks occur less often than they used to and tend to taper off more quickly than they did in the past. This is largely because researchers have developed agents that can attack and weaken the moths. Over the years, scientists have introduced dozens of species of insects that attack eggs, caterpillars, and cocoons. They also have introduced a fungus and virus diseases that ultimately control outbreaks. The NYS Department of Environmental Conservation expects that, with the buildup of spongy moth predators, parasites, and diseases, the current outbreak will likely collapse naturally, probably this year or next.

Q: Which trees are most susceptible to spongy moth caterpillar damage?

A: Spongy moth caterpillars prefer to eat the leaves of oaks, aspens, birches, crabapples, and a few others, but will move into many more kinds of trees and shrubs in an outbreak such as the one we are currently experiencing 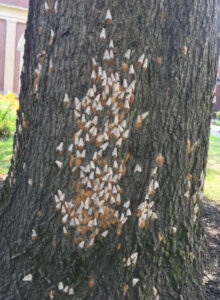 Q: Will the affected trees die?

A: Not necessarily. Heavily defoliated deciduous trees will push out a new set of leaves in July. Healthy trees with strong root systems are resilient and may survive 2 or 3 years of severe defoliation. Conifers like pine, hemlock, and spruce, however, may die after severe defoliation in a single year.

Q: Will young trees survive, like those planted by Tree Toga volunteers in recent years?

A: This is a concern, particularly for trees planted this year that are not yet established. Fortunately, it is easy to control caterpillars by hand on these small trees (see below).

Q: What can homeowners do to prevent or minimize damage from spongy moth caterpillars?

A: If you have a few affected trees, there are measures you can take for some control over caterpillars. However, in larger forested areas, these measures are not practical:

In addition to attacking the caterpillars, you can help by pampering your trees. Give them plenty of water throughout the summer to help them build their energy reserves so they can survive with fewer leaves.

Q: Is there anything homeowners can do to prevent future infestation?

A: Look for the egg masses on trees starting in late summer and scrape them off into a bucket of soapy water. Let them sit in the water for 48 hours to kill them. This may reduce the number of caterpillars you see the following spring.

Q: What can be done about large-scale infestations?

A: Insecticides have historically been the only cost-effective strategy for large commercial forest tracts where products such as timber or maple syrup are produced, but they have significant downsides. Though these measures can be effective in controlling large-scale outbreaks, they also kill large numbers of beneficial insects and have severe impacts on entire ecosystems. These days there is little support for broadcasting toxic chemicals. Insecticides may be appropriate in some targeted situations, such as preserving heritage trees in high visibility situations.

Q: Where can I get more detailed information about spongy moth?

A: The New York State Department of Environmental Conservation provides a lot of good information about the history and biology of the spongy moth, and what homeowners can do for individual trees.