Saratoga’s Greenbelt – Preserving the City in the Country vision 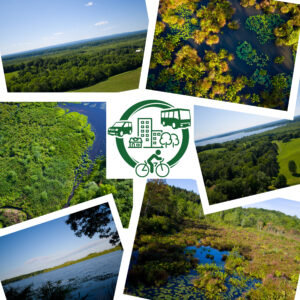 This vision for Saratoga Springs was reaffirmed in the opening page of the 2015 Comprehensive Plan:

“Saratoga Springs is the “City in the Country.” This concept reflects a city with an intensively developed urban core and an economically vibrant central business district, with well-defined urban edges and an outlying area of rural character, comprised of agriculture, open lands, natural and diverse environmental resources, and low density development.”

While it is often confused with the more recently established Saratoga Greenbelt Trail – which is also an excellent asset to the community – the City’s Greenbelt is something entirely different. The Greenbelt is a vision for planning and guiding land use regulation; in addition to preserving the rural character and valuable natural resources, it also functions to limit sprawl and to provide a more vibrant and walkable urban core. This has been a key part of Saratoga Springs’ attractiveness to tourists, residents and businesses.

In addition to providing unique character and economic benefits to the City, the Greenbelt provides many environmental services, including climate change adaptation and mitigation. Importantly, the city’s 2015 Comprehensive Plan declares that there is a legitimate public interest in protecting the city’s Greenbelt:

“Natural features are valuable as part of a community’s character, scenery, and wildlife habitat, as well as the area’s quality of life. The ecological integrity of the city’s natural resources, including groundwater, streams and wetlands, trees and woodlands, steep slopes, vegetated wildlife habitat, and areas rich in biodiversity must be maintained and protected, even as development occurs. …With conservation as the core development principle in this area, the community is assured that development in this area works alongside conservation values.”

Protecting the City’s countryside and rural character helps preserve its cultural heritage. Maintaining the Greenbelt helps distinguish our community from other tourist destinations that failed to protect their unique character.

Did you know that wetlands occupy almost 20% of the land in the Greenbelt? These large areas of wetlands and wildlife habitats are ecologically important and provide benefits, or ecosystem services, for our community. Much of the stormwater that leaves the City travels through wetlands; wetlands filter out pollutants and improve the water quality of stormwater leaving the urban core before it reaches downstream lakes. Wetlands also reduce downstream flooding during intense rainfall events, and provide habitat for many species of birds, mammals, and fish. By providing these vital ecosystem services, wetlands thereby reduce City expenditures on stormwater management.

Sustainable Saratoga has long been committed to protecting the sensitive and valuable natural areas in the Greenbelt. We advocate for land use regulations that strengthen environmental protections and limit the intensity of new development and incompatible uses. The 2015 Comprehensive Plan, as well as the current draft of the Natural Resources Inventory, makes the case for the importance of safeguarding this valuable area. The next step is to ensure that the Unified Development Ordinance codifies meaningful protection of the “City in the Country” vision.