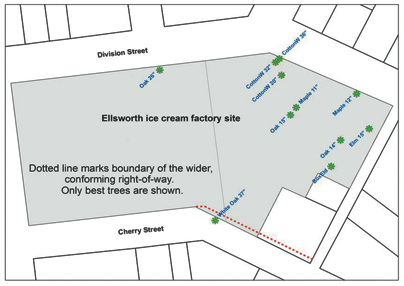 The planned development of the former Ellsworth Ice Cream Co. factory site on the west side of Saratoga Springs is a good urban infill project that Sustainable Saratoga can support, although we wish it would contain some affordable units.

The project will bring more residents to the downtown area, will provide a good transition to the west side and will make our city more walkable. Perceived distances will shrink as condo dwellers on Railroad Place discover that Allerdice and even the West Side Recreation Center stand just a short, attractive neighborhood walk away.

However, the preliminary sketch plans submitted last fall to the city Planning Board contain a number of shortcomings that Sustainable Saratoga hopes will be more satisfactorily resolved in the final plans (see map). The public interest will be better served if the project is modified by:

The beautiful trees on the Ellsworth site initially brought this project onto Sustainable Saratoga’s radar. Last year’s tree inventory established the massive white oak on Cherry Street, 37 inches in diameter, as the largest white oak on Saratoga’s streets. This magnificent tree was almost certainly alive when the racetrack opened 150 years ago this summer, and perhaps even when Gideon Putnam walked Saratoga’s streets. We urge the city to preserve this spectacular and historic city-owned asset.

Additionally, about 40 mature trees — oaks, maples, American elms, cottonwoods and box elders — stand in the northeast corner of the property, forming perhaps the best-preserved patch of urban forest in the city’s inner zone. To clearcut the site and lose all these beneficial trees would be painfully at odds with the city’s goal of “preserving and expanding the urban forest” and with the citizen and city energy that is currently going into producing an Urban Forest Master Plan.

Designing the project to spare many of these trees could easily be done and would greatly enhance the quality of the development, to the benefit of residents and the neighborhood alike.

Further attention also needs to be given to the width and design along Cherry Street. Good planning should ensure that Cherry Street can evolve over time into an attractive corridor for pedestrians, bicyclists and cars moving between downtown and various West Side destinations. Yet, east of the dogleg bend on Cherry, the existing 41-foot width of the public right-of-way is substandard.

Read more in The Saratogian