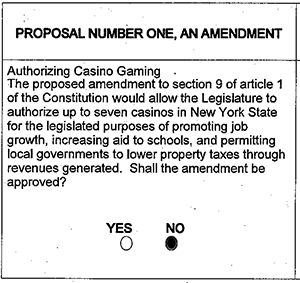 Your vote counts on the state and community levels.

The state vote is not the final word.

Sustainable Saratoga’s Casino Gambling Position: The election on November 5, 2013 will give voters in New York State the opportunity to vote on a proposed amendment to the state Constitution which would authorize up to seven full casino gambling facilities to be sited statewide, with a real possibility that one would be located in Saratoga Springs. Sustainable Saratoga believes that casino gambling is inconsistent with sustainable approaches to community life. We are therefore opposed to expansion of casino gambling and the proposed amendment to the New York State Constitution (Ballot Proposal 1).

Casino gambling is a single-destination activity, which succeeds only by keeping its guests at the casino. They are typically a drain on local businesses because they directly compete with them by discounting rooms, entertainment, and amenities, thereby drawing customers away from downtown businesses. The projected tax-revenue benefits, if even realized, can be temporary, and when gambling revenues decline, it is the taxpayers who are burdened–with lower property values and higher rates of real estate foreclosures. Local services, such as police, fire, and hospital services, become stretched.

The social costs of full casino gambling are potentially significant as well. Gambling is a regressive tax, exacting its profits from those who are least able to absorb financial losses. This can result in spikes in poverty rates, unemployment rates, and crime.

The projected benefits of full casino gambling have yet to be convincingly documented. We are concerned that the promise of a windfall for host communities will not be realized. Meaningful guarantees and demonstrated long-term value are lacking. The risks are too high and the potential benefits too few.

Sustainable Saratoga opposes the expansion of full casino gambling in New York and in Saratoga Springs as a potential host community.