SARATOGA SPRINGS, NY – April 28, 2017 – Over 125 volunteers dug in and got their hands dirty on Saturday morning at Sustainable Saratoga’s sixth semi-annual Tree Toga planting effort. After assembling at High Rock Park for orientation, teams of eager tree planters dispersed across the City to plant 35 young trees on public and private land.  Tree Toga is the product of an ongoing partnership between non-profit Sustainable Saratoga and the City’s Department of Public Works (DPW), which provided 25 of the trees from its annual taxpayer-funded tree planting budget; the remaining ten trees were funded by donor contributions.

“We are proud to be working with our partners on initiatives that make our community a greener, healthier, and more beautiful place to live,” said Tom Denny, Chair of Sustainable Saratoga’s Urban Forestry Project. “This work is only possible thanks to the tireless efforts of our volunteers, who are the backbone of Tree Toga.”

Sustainable Saratoga organizes two Tree Toga planting events each year: on the last Saturday in April (a great Derby warm-up) and the first Saturday in October. Most of the trees planted during Tree Toga are placed in the City’s right-of-way, in front of the private homes of “Tree Hosts”.  These volunteers play a critical role in the young trees’ survival, watering and nurturing street trees during the first two vulnerable years.  A few of the trees were also planted on City or school district properties, including some run by the Recreation Department.

Trees are a critical component of the City’s infrastructure that essentially pay for themselves: they increase property values, improve air quality, reduce water pollution and water treatment costs, enhance people’s mental and physical health, beautify public spaces, support local wildlife, and provide a living link to Saratoga’s vibrant history.  The City committed to expanding and preserving its urban forest when it adopted the Urban & Community Forest Master Plan (UCFMP) in 2013, which was drafted in consultation with Sustainable Saratoga. The resulting public-private partnership on urban forestry initiatives has grown over the years: to date, Sustainable Saratoga has planted 175 new trees across town.

Many residents are surprised to learn that popular tree species like maples are not part of Sustainable Saratoga’s Tree Toga planting efforts.  A tree inventory conducted in 2012 revealed that over 60% of the City’s trees were maples – an over-reliance that leaves the urban forest vulnerable to disease and pests.  Since a bio-diverse forest is a resilient forest, tree species from the City’s official planting list are rotated every year. This latest planting included hackberry, Kentucky yellowwood, gingko, honey locust, American elm, and oak trees.

Sustainable Saratoga also prioritizes large-growing species of trees, since large shade trees provide far greater environmental and economic benefits than small ornamental ones. “We are helping the City to achieve its ‘large tree vision’,” explained Tom Denny. “Our goal is to envision and plant streetscapes with the kinds of large trees that have historically shaped the Saratoga experience.”  This is also the objective of Sustainable Saratoga’s Centennial Trees project: a multi-year, public-private campaign that aims to leave a transformative legacy of enhanced streetscapes by planting large-growing trees in high-profile locations.  Since the program’s launch in 2015, more than a dozen partners have engaged in planting, and more partnerships and plantings are in the pipeline for this later year.

The next Tree Toga planting event will be taking place on Saturday, October 7, 2017. 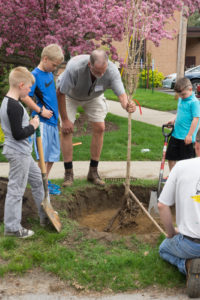 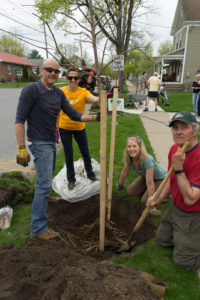 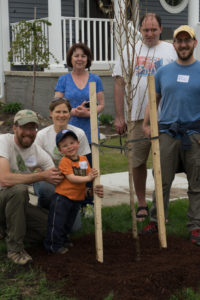 Sustainable Saratoga is a not-for-profit organization that promotes sustainable practices and the protection of natural resources, through education, advocacy and action, for the benefit of current and future generations in the Saratoga Springs area.  Since 2008, Sustainable Saratoga has been a leader in promoting awareness of environmental issues and what we as a local community can do to minimize our ecological impact while maintaining a high quality of life.