Sustainable Saratoga recently sent a letter to the City Council describing some concerns we have with the City Center Parking Structure plans for the Flat Rock Parcel.  The full text of the letter is below. Click here for a pdf version of the letter. 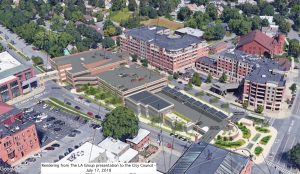 As Sustainable Saratoga continues to follow the evolution of the Flat Rock Parcel, it is evident that the City Center Parking Structure is in its final design stage. We realize there have been some significant improvements made since the original plan was rejected by the City Council last year.  However, the most recent sketches and presentations continue to reveal that the design (for the structure) still fails to meet the City’s own key urban design standards.

In our view, the current design for the parking structure has the following flaws:

The LA Group drawing presented at the February 5, 2019 Council meeting showed that the physical parking structure would abut the Maple Avenue property line for over 200 feet. It is not set back 50 feet as recommended in the Zoning Ordinance T-6 Guidelines (3.1.2D.1) which states “parking structures should be set back 50 feet from property line of all adjacent streets to reserve room for liner buildings.”

The key reason for the recommendation that parking structures should not be up to the street is that they create “dead” and unproductive street life.  They do not contribute to the economic vitality of the street and they are unattractive to pedestrian use.  This is all evident with the adverse impact created by the Woodlawn Avenue parking structure façade.

This parking structure is located in the T-6 zoning district where it is intended that structures should be built up close to the street and that the street level first floor should be occupied by commercial or civic uses.  Article 2 of Zoning Ordinance has a long list of acceptable street level uses intended to create lively street activity.

The City Center could easily construct the shell for these first floor street level commercial or civic uses and then hire a developer or management company who would fit up the spaces for rent.

Adding more commercial space in the downtown area fits with smart urban design, with the goal of increasing the density of commercial activities in the urban core and creating a vibrant downtown area.

While we appreciate the proposed 50 foot setback for the parking structure on High Rock, it does not achieve the desired objectives.  Due to the federal/state funding for the Greenbelt Trail, the 50 foot wide linear park along High Rock Avenue will likely be deed restricted.  The bike path will become an extension of the street public right-of-way. Based on the current design and proximity to the Greenbelt Trail, it will not be possible to construct a liner building in front of the parking structure along High Rock Avenue.  So, to meet the intent of having lively activity along the extensive façade of the parking structure, the first floor should include commercial and civic spaces.  The one or two day a week seasonal farmer’s market is not an adequate substitution for permanent business and community space.

We appreciate that the current bridge has been reduced in size and volume. However, Smart Growth guidelines state skyways or tunnels should be avoided as they rob sidewalks of pedestrian life and hurt surrounding retail businesses. We should all want visitors and conventioneers to use the street while coming and going to the City Center.

Progressive cities around the world are taking the lead in incorporating green infrastructure features into public spaces, such as green building materials, stormwater capture and reuse (subsurface infiltration), natural shading materials, air pollution mitigation and solar panels.  These improvements save money in the long run, but we are told only a few of these might be incorporated and only if there is enough money left over.  These features should not be an afterthought in the design process, but rather viewed as a priority.

We have been steadfast in our commitment to sustainable urban design and have expressed concerns about these design features outlined above since 2013. Over the past 6 years, we have met with City officials and the City Center Authority to express our views.  We have never received satisfactory explanations as to why the City chooses to disregard its own good design standards.

We hope the City Council will critically review the design of this parking structure when it is submitted to you in the coming months. We urge you to request that the final design include the important urban design features outlined in this letter.

Sustainable Saratoga is a not-for-profit advocacy organization based in Saratoga Springs. Its mission is to promote sustainable practices and the protection of natural resources, through education, advocacy, and action, for the benefit of current and future generations in the Saratoga Springs area. Since 2008, Sustainable Saratoga has been a leader in promoting awareness of environmental issues and what we as a community can do to minimize our ecological impact.